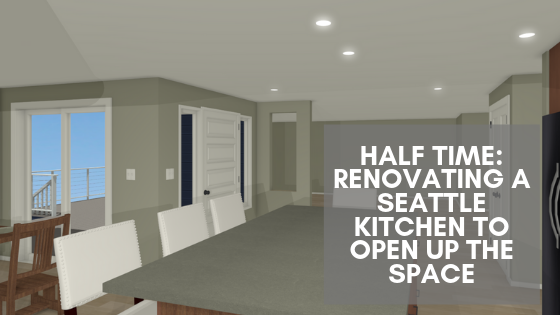 Half Time: Renovating a Seattle Kitchen to Open Up the Space

Tom’s hit the mid-point of his kitchen remodel with dining room addition in his Seattle home. The interior framing is done, and we’re working on the deck outside while the electrical rough-in continues inside.

He’s excited to see what it will become. “With the addition wall, it was amazing how fast the structure was built,” he says. The expanded dining room will have a Nano wall, which will make the most of the ocean view and fold away when open to allow for a free flow between inside and out on the deck. As part of the new deck, we built a trellis at the rear to create a nice visual backdrop.

“There are no flaws,” Tom says. “They put up this perfect trellis, every time I show someone a picture of what’s being done, and they say ‘wow, they really know what they’re doing.’ I’m so impressed by the quality of the work done by the Fuller Living crew and all the subcontractors — they’re top-notch.”

That confidence is helping him get through the project. It’s stressful living in a construction zone, especially in a project like this where we’ve demolished the kitchen, and most of the living space is affected. Tom’s living in his bedroom, a spare room, and his bathroom.

He’s cobbled together a kitchen of sorts between the spare bedroom and the bathroom, which hold a toaster oven, microwave, and Instant Pot. Even without a full kitchen, when the craving for biryani hit, he marinated the chicken overnight in his fridge, then used the Instant Pot stored in his bathroom to cook it. “It turned out great,” he reports.

Tom has a totem of sorts that also helps him keep his eyes on the prize. This red bag, which he calls his hope chest, is filled with samples of his finishing materials — tile, counters, cabinets, flooring. It sits in the garage. As he leaves home for work, he checks on that bag. “Seeing that little hope chest tells me it’s all going to beautiful when it’s all done,” he says.

“Over and over and over again, I’m so grateful for knowing everyone’s at the top of their game,” Tom says. “But June can’t come soon enough!”

To see what we started with, check out our project kickoff post on the blog, and be sure to check back this summer to see the final photos and see what Tom thinks.

And if you’ve got a kitchen remodeling project (or any other renovation) in mind, please get in touch — we’d love to talk to you!